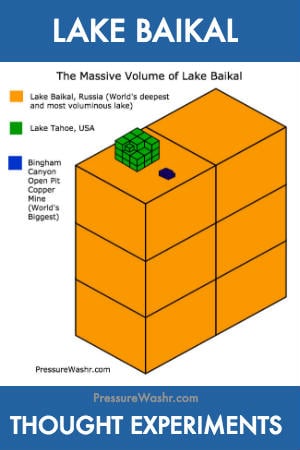 The amount of water in Lake Baikal – the world’s deepest and most voluminous lake – is more than all 5 North American Great Lakes combined + a second Lake Erie + a Crater Lake.

But volume is much harder to think about than distance. So here’s 21 thought experiments to try and help you visualize how much friggin’ water it has.

1. Let’s empty Lake Baikal’s water onto American soil… How deep a pool would it make? 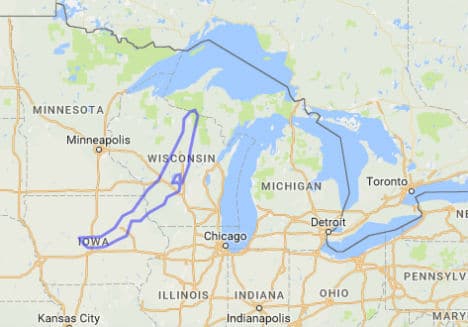 That purple outline is Lake Baikal. It doesn’t dwarf the great lakes in area but has so much more water because it it much deeper. More than 4x the average depth of the deepest Great Lake.

2. How long would it take Americans to drink the water?

Population of USA is ~319 million people. Let’s say that everyone drinks around 2 quarts or half a gallon per day. That’s around 2 litres per day. It would take just shy 100,000 years to drink it all.

3. How deep a pool if just emptied onto Texas land area? 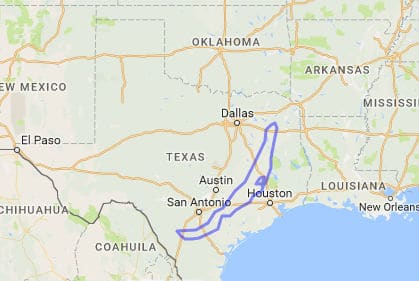 4. How much would Nestle pay to suck up and bottle all that water?

5. How long would it take to transfer all that water onto Canadian and Mexican land (Using one of the world’s most powerful water pumps in each of the 14 border states)?

6. How deep of an Ocean would it make on the Moon?

7. How long would it take Niagara Falls to move equivalent of that much water?

8. How long would it take the Amazon River to discharge the equivalent of that much water?

Around 3.5 years for Amazon River to discharge a Lake Baikal.

9. How many years could the worldwide consumption of bottled water be sustained by Lake Baikal based on current volume and 2013 consumption

10. How long would it take the entire water consumption of all American industries and uses to use equivalent of that much water

11. How long would it take Michael Phelps to swim in his new pool from his hometown (Towson, Maryland) to New York City at his 100m butterfly pace

12. How many Lake Tahoes could Lake Baikal fill up

13. Distance a chain of 50m Olympic pools would have to stretch to hold Lake Baikal’s water (that’s 9.2 billion Olympic pools)

To Mars and back (460 million kilometres)

14. Pressure at the bottom of Lake Baikal

Imagine a 2016 Honda Civic balanced on a coin, and with that coin (and its weight) duplicated and glued everywhere over the entire area of your body.

15. Time for Michael Phelps to swim straight down to the deepest point of Lake Baikal at 100m pace

16. Get rid of Lake Baikal’s water and divert all the worldwide yearly beer consumption into Lake Baikals basin. How many years to refill

17. We want to store all Lake Baikal’s water in Empire State Building sized tanks. How much land area do those tanks need to take up to store all the water and how many of those tanks do we need

18. If Russia found a way to somehow turn all Lake Baikal’s water into premium oil how much would that oil be worth

19. If a same spec tunnel as English Channel tunnel went from Los Angelas to Sydney, Australia… What percent of the total volume of Lake Baikal water would it take to fill that entire tunnel with water

20. If you used just Lake Baikal water for Hoover Dam hydro plant how long could it provide current nameplate power

13,096 years including valve discharge. It could hypothetically power all hydroelectric plants in the United States for 194 years given a straight ratio calculation of Hoover Dam production and total US production of hydro power.

Next Post: See a Disassembled Electric Pressure Washer With All its 144 Parts Organized Neatly