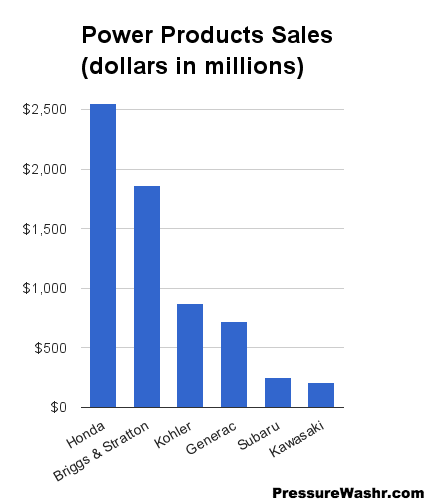 All data on this page is sourced from respective company Annual Reports, SEC Filings, Official Press Releases, US Tax Court Filings and Company Data-files. Estimations are clearly stated and explained.

Would you be surprised if I told you 94% of residential power equipment is powered by an engine from 1 of 6 companies?

What if I told you that every-single-one of the 25 bestselling gas pressure washers has an engine made by either Honda, Briggs and Stratton, Kohler or Generac?

Well, the fact is true – the overwhelming majority of power equipment companies choose to outsource the engine expertise to: Briggs and Stratton, Honda, Kohler, Kawasaki, Generac or Subaru (and let them deal with EPA and CARB emission standards).

Here’s an in-depth analysis of each companies power equipment small engine divisions. For each you will learn the division’s sales numbers, which brands use the engine, which power equipment uses the engine and the sources of information.

Honda, Briggs and Stratton, Generac, Subaru and Kawasaki are all public stock companies that release financial data. The numbers in the graph were sourced from their SEC Filings, Annual Reports and other Investor Relations data.

Numbers include their general purpose engine sales and their own brand power equipment sales.

Numbers include their general purpose engine sales and their own brand power equipment sales.

Numbers include only their residential power product sales (they make their own engines). It does not include their commercial and industrial generator sales.

Numbers include their general purpose engine sales as well as their pumps sales – this is their Industrial Products Company numbers. A further breakdown between engines and pumps could not be sourced.

Numbers include only their small general purpose engine sales.

Numbers are estimated because it is a private company and doesn’t release financial statements. The number in the graph for Kohler was sourced from 2 places:

The Kohler numbers are an estimate based on provided numbers. Also, Kohler’s engine division makes engines ranging from 4 – 134 hp. So not all small engines. A guess would be that 50% of the $875 million sales is from engines not considered small engines.

What About Just The Small Engines?

Taking all this into account when trying to find the exact sales number for just small engines we can make an educated guess that Honda and Briggs & Stratton stand alone at the top at around $1.4 billion in small engine sales. Generac only uses their engines in their power equipment – best pressure washers, generators and water pumps – so in terms of small engines produced they are more equal with Kawasaki and Subaru. And Kohler is somewhere in the middle – less than Honda and Briggs but more than Generac, Kawasaki and Subaru. 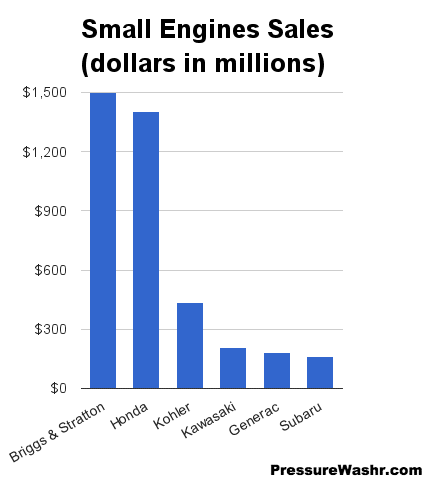 The Power Products Sales graph tells us sales of respective Power Products divisions, which includes (in most cases) both engine sales and branded power equipment sales…

…For example, Honda numbers include their mowers, generators and pressure washer sales. That Honda power equipment has the Honda small engines AND everything else that makes it work. So when it comes to Honda finding the engine sales requires some approximation.

Same with Generac. Their power products sales are for their generators, pressure washers and water pumps – which include a Generac small engine.

Here is a revised graph that is a much better comparison of the number of small engines made by each company.

How The Numbers Were Adjusted

To pull out the sales number for small engines from their brand power equipment sales I used a factor of 25%. What the number is saying is that for every sale of a Briggs pressure washer 25% of the cost is the engine. They have a pressure washer that sells for $300 so this estimates the engine in that unit cost them $75 to make on the assembly line (not including labor). Does this seem low? Let’s break it down. So the pressure washer also has a pump ($35), valves/switches/buttons ($15), frame/wheels/assembly ($30), nozzles/hose/spray gun ($15), paint and other incidentals ($10), a 25% markup to account for sales, marketing, R&D, employee salaries and finally a 25% markup to allow the company to make some profit. Add all that up and you have a $300 pressure washer.

Honda only tells us the grand total for all their power products including engine sales and Honda branded power equipment sales. They tell us they sold 6.036 million units. So divide the units sold by the total revenue and you see the unit cost comes out at $422 (Briggs unit cost is more like $206). So we straight away know that their number is highly skewed because they sell lots of expensive lawn mowers and best portable generators. To get the number in this graph I simply used the units sold (since Honda units include Honda engines we know they made 6 million small engines 2014) and multiplied it by Briggs and Stratton’s unit price (because we know their breakdown) and included for the fact that Honda tends to have slightly more expensive engines.

Kohler has an engine division that sells engines up to 134 hp. Typically a small engine is less than 25 hp. I simply took 50% of their estimated total sales to account for the fact they definitely sell tons of small engines but also sell some larger engines within their engine division. It is a guess, I admit… But it makes sense since both Honda and Briggs and Stratton list Kohler as a top 3 competitor.

Gives us their engine sales as a percent of their Motorcycle and Engine division sales. No guess here.

Numbers use the same formula as Briggs and Stratton: 25% of power product sales are the engine.

Their Industrial Products Company includes their general purpose engine sales and pumps sales. Their pumps use their engines. I simply assumed (read: guessed) that that division is a 40:60 split of engine:pump sales. And then the pump sales has a 25% cut to account for the Subaru engines within the pumps.

Let’s look at each company individually.

The chart above shows the combined power product sales of Briggs and Stratton. In 2012, Briggs and Stratton announced they had reached the milestone of 70 million engines made at their Poplar Bluff, Missouri plant. That’s just 1 of 5 engine manufacturing plants in the USA. 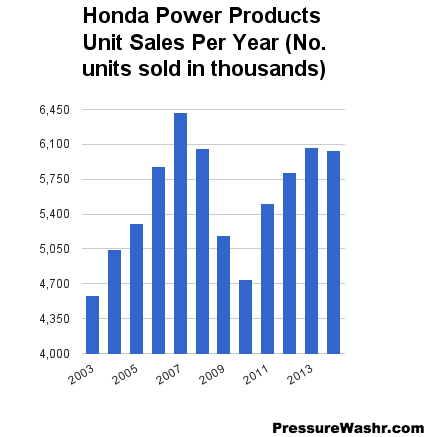 Honda produced 6.036 million small engines for use in power equipment in 2014. Honda reached 100 million cumulative power products production in 2011. As you can see in the chart Honda’s power products unit sales peaked in 2007 with 6.421 million units and reached a 10 year low in 2010 with 4.744 million power products sold.

Many of the same companies that have Briggs and Stratton engines also have models with Honda engines. Honda offers 400 different models of small engine across 29 basic categories.

Kohler is a private company that has an engine division that accounts for 15 – 20% of their total sales. Their Kitchen and Bath division accounts for the majority 70 – 75% of their sales. They also have an Interiors division and a Hospitality division.

Forbes estimated their 2014 revenue at $5 billion.

The first expeditions to Antarctica used Kohler generators. Kohler is the largest employer in Wisconsin.

7.76% of the $2.7 billion total 2014 sales from Kawasaki’s Motorcycle and Engine division (which is $210 million) was from general purpose engine sales.

Engines used mainly in these products: Mowers and lawn tractors.

Generac Power Systems is mainly a generator company – both residential and commercial. They claim to “own” 70% of the US market. They also make water pumps and pressure washers. And the pumps and engines that go along with them.

Engines used in these brands: Generac.